All sports have inherent risks. STUNT involves athletes participating in partner stunts, pyramids, tosses, jumps, and tumbling. These skills include height, inversion, and rotation of the body as well as working in coordination with other athletes to perform these skills. Special care should be taken by supervisory staff to ensure that skills are taught in a progressive manner, requiring proficiency before advancing to skills with higher difficulty.

The Myth of Cheerleading Injuries

As STUNT is based on the skills found in cheerleading, one of the first issues to address is the unfounded perception that cheerleading is somehow more dangerous than other sports, including football.

Without getting into details for the purposes of this article, many years ago a news article from Yahoo Sports inadvertently left off an important piece of information in a report it presented. It said that cheerleading had 67% of catastrophic injuries in all sports. The key mistake there is that the data was only of female sports, which have a significantly lower number of injuries than males sports. This mistake was then copied by the 300+ outlets that cited Yahoo Sports, including false headlines such as “Cheerleading is more dangerous than football”, obviously leading to the misperception that cheerleading is more dangerous than football. Yahoo updated their article, but few of the outlets that shared the information did. The data is simply not supported.

Additionally, even within cheerleading, the number of catastrophic injuries has been reduced dramatically over the past decade (see Chart 1 below). Very few news outlets have decided to share this information, leaving an information gap that still purports that cheerleading is dangerous. 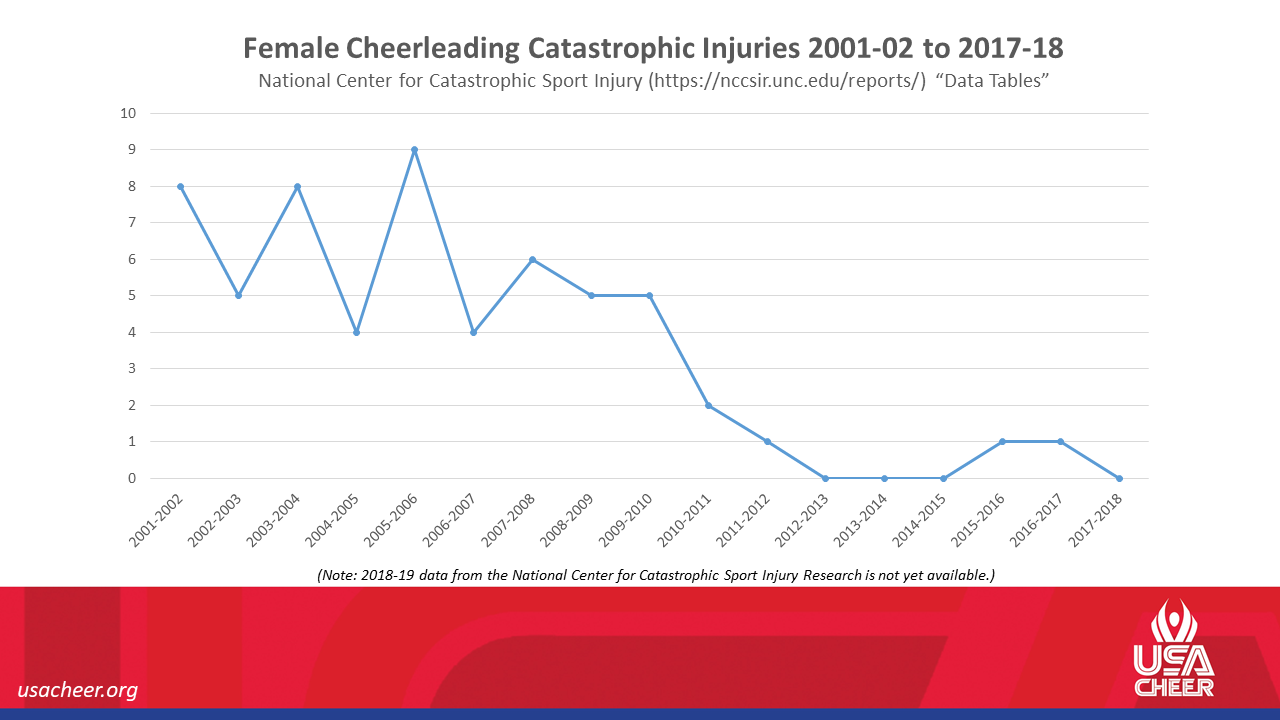 Further, an ongoing 10-year study by the National Federation of High Schools has included cheerleading in its reporting, and throughout this study, cheerleading has ranked amongst the safest of the 20 sports studied in terms of injury rates, coming in 4th safest in the latest 2019 study (See Chart 2 below). In the same study, cheerleading shows a lower concussion rate than 8 other sports, including women’s soccer, lacrosse, and basketball (See Chart 3 below).

Finally, cheerleading emergency room visits are lower than several female sports, though the cheerleading figures are often cited in articles without any mention of these other sports for any type of perspective (See Chart 4 below). 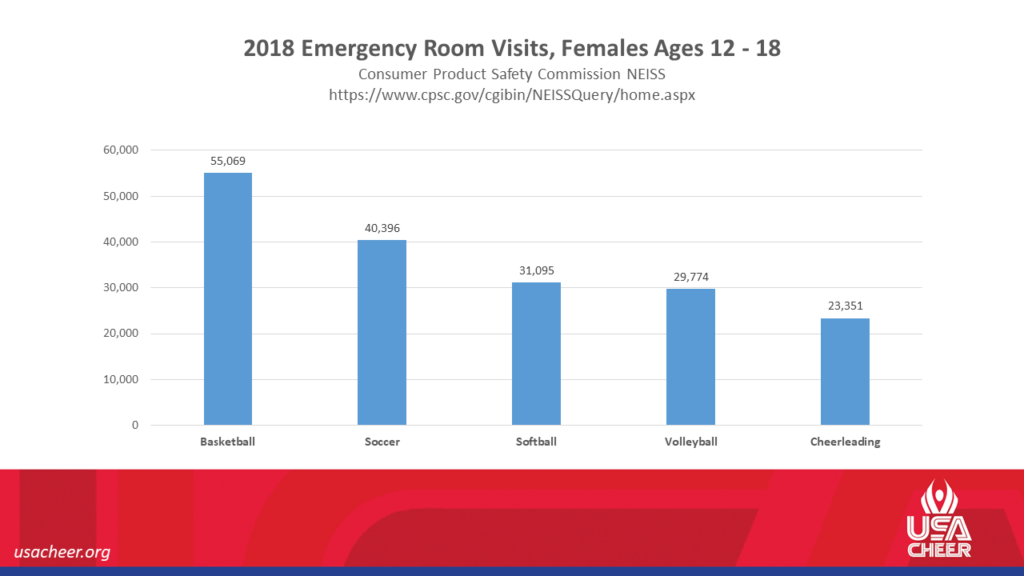 All of the available cheerleading injury data can be found at https://www.usacheer.org/safety/research

What has STUNT done to minimize risk?

The format of the STUNT game vs. cheerleading leads to an even further decrease in risk.

In a cheerleading competition, teams are allowed to perform any skills within the allowed rules structure. This includes making up new skills and attempting the most difficult skills allowed, regardless of ability level. All athletes are on the floor at the same time, attempting to perform the most difficult skills they can perform in order to gain points. Scoring is based on execution and difficulty, Coaches training includes risk minimization, and penalties for falls help encourage teams to stay within their ability levels.

How the STUNT format minimizes risk:

In addition to the game format, STUNT coaches are required to complete the USA Cheer Safety and Risk Management Course, which is required of all NCAA cheerleading coaches and most state high school athletics associations who require coaches’ sport-specific training. They are also trained on the rules and regulations of STUNT, including the coaching strategies outlined above that can reduce risk while factoring into their overall game strategy.

As STUNT is a new sport, it has not been included in external formalized studies or the NFHS or NCAA Injury Surveillance System up to this point.

A more formalized reporting system was put in place for the 2020 season, but due to the COVID-19 pandemic, was not able to be utilized. We are looking forward to implementing this system in the upcoming 2021 season.